In TGIF#1, we realized that most people don’t want to retire, they just want to do things that make them lead a more fulfilling life.

With the next instalment of TGIF, I decided to go deeper into the human psyche. Personally, I believe most people have a ‘positive outcome, future oriented‘ perception about themselves. It simply means that people have plans for their future and they strive everyday to be the person who would turn those dreams into realities.

So they have a future oriented outlook with a person in mind (themselves) who’s standing tall on the positive outcome.

E.g. if you’re working to become a CEO someday, you already might have developed a positive mentality that makes you believe that you’re already X way there. (X = half, 30%, 20% etc). Other people might not know anything about it. 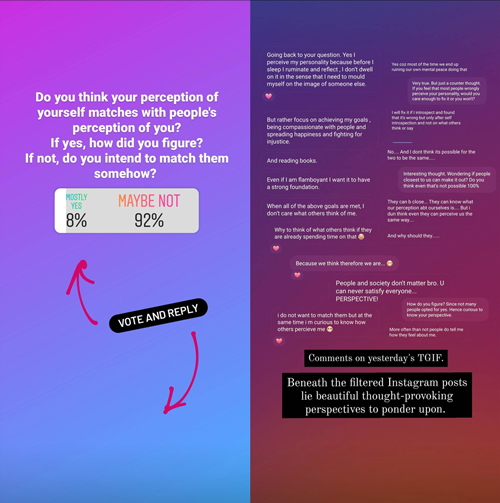 92% of voters felt “people’s perception didn’t match their own”.

And that’s a beautiful result to have. It means people have plans and they’re working on them.

Even 8% people who voted “Mostly yes” are people who have made sure they send all the right public signals so that the perception matches. These signals can be the way you present yourself in the public domain through social media, in-person meetings, through ideas, through friends, family & acquaintances.

All in all, a feel good TGIF with feel good conversations. 🙂

Why did a cancer patient travel 260km all alone to meet my dad?